These are some major comic book characters who are still dead in the comics. This list will not contain characters killed for a superhero origin like Peter Parker’s Uncle Ben and Bruce Wayne’s parents. Additionally this will not contain the likes of Wolverine, Cyclops, Wally West, Roy Harper. These super hero’s may possibly return in future.  Only characters added to this list, you possibly will never see on comics (Hopes so!).

Here’s the list of the comics in which they are killed or died. In the MCU’s Doctor Strange, Ancient One was portrayed by Tilda Swinton but she died when attacked by Kaecilius. She has been confirmed for Avengers 4, however. Wether she will be brought back from past or or be in her astral form, nobody knows. Regardless, here we are talking about the Ancient One from Comics. Ancient One was Sorcerer Supreme before Strange and is his mentor. He is created by duo of Stan Lee and Steve Ditko and first appeared in Strange Tales #110. After choosing Strange as his successor, a monster Shurma-Gorath tries to invade earth through his mind. Ancient One asks Strange to destroy his physical form in order to save the Earth. His soul then merges with Eternity and he became one with the universe. Alex was the girlfriend of Green Lantern, Kyle Rayner, long before he gets his Lantern Ring.  This character is created by Ron Marz in 1994 and first appeared in Green Lantern #48. She was a photographer in LA. that helped Kyle to train with his power. However this death is the most controversial one. She was killed by Major Force who stuffed her in a refrigerator which was found by Kyle. The death is later coined as “Women in Refrigerators” by feminist fan base whose oppose the fact that female characters are injured, raped, killed or depowered (fridging) to aid male hero’s story. We all are familiar with the story of Vision, but in 2016 Tom King and Gabriel Hernandez Walta created a family for Vision. In this story arc Vision has a synthezoid family consisting of his wife, Virginia, son Vin, daughter Viv and their dog Sparky. Vision tried his best to have the normal life he always wanted. Their house is attacked by Grim Reaper, nearly killing Viv.

Virginia then killed Grim Reaper and buried him in the backyard. Viv’s classmates father knows this, and tried to blackmail Virginia, so she killed him too. Then Agatha Harkness had a vision about Vision family causing genocide in the future. The Avengers send Vision’s brother Victor to spy on the family. When Vin finds about this and attempt to stop him, he damages Vin beyond repair. After that, Virginia killed Victor. Fearing the future of Viv will be destroyed if both her parents are prosecuted, she drinks corrosive water that kills her too. Lot’s of death in the Vision Family. This couple can be said to have suffered the most of all characters on my list. Created by John Broome and Carmine Infantino, Ralph debut in The Flash #112 as Elongated Man and Sue in #119. He later became one of the closest friends of Barry Allen aka The Flash. In the 2004 event Identity Crisis Jean Loring killed Sue while she was expecting a child.

DC’s 2006 weekly series 52, shows us how Sue’s death affected Ralph after knowing she was with child when she died. In this weakly series a cult tried to resurrect her, which broke Ralph to his core. In week 42, Felix Faust tried to kill Dibny, in order to trade Dibny’s soul to Neron, in exchange for his life. However, Ralph outsmarted them both as when Neron kills Dibny, both Faust and Neron were trapped for Eternity in the tower.

At final week of 52 Dibny reunites with his wife after his death as he wished. Later in the events of 2008 Blackest Night, lots of major characters are brought back to life but this poor couple didn’t come back. Mar-Vell is only character in the whole list who died of natural cause i.e., Cancer. Captain Marvel was created by Stan Lee and Gene Colan, first appeared in Marvel Super-Heroes #12 as a soldier of the Kree empire, sent to spy on Earth. For sometime he observes the humans but later become their hero. Throughout his life he is one of the most decorated superheroes.

During his adventure in Dark Dimension, Mar-Vell comes to know that exposure to Compound 13, gave him Cancer. Kree also refuses to treat this as he is declared a traitor. He accepts his fate and all his friends and allies come to pay him respect in his last times. He went to the afterlife with Mistress Death and Thanos. At the events of 2010 Chaos War, lots of members of the Avengers return from the dead, including Mar-Vell as their leader. Eventually he was killed by the hands of Grim Reaper. 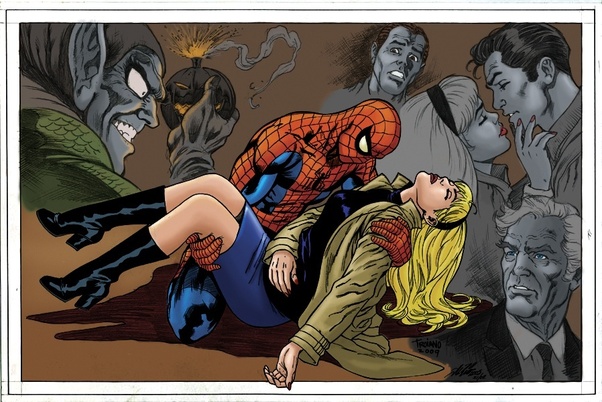 Ok. Ok. I know we have a Gwen Clone, an alternate Gwen but we did not have our own original Gwen Stacy. Created by the iconic duo of Stan Lee and Steve Ditko. Gwen first appeared in The Amazing Spider-Man #31. I know lots of people think death of Gwen as part of Spidey’s backstory. However, Gwen was a important part of Peter life not his origin.

She was the main love interest for Pete long before MJ. For me, she is Pete ONE TRUE LOVE. She meets Peter at Empire State University. The daughter of NYPD Captain George Stacy was killed due to the creators wanting to make M.J., Peter’s main love interest (my opinion). Green Goblin finds out Spider-Man’s identity and threatens to kill everyone he loved. Gwen falls from a height. Peter saves her by shooting a web but the whiplash snaps her necks and kills her. Many people believe its Peter’s fault but this particular death became the most iconic pivotal point in both Spider-Man’s History and the whole comic industry. At that time every superhero always saved their loved ones without failing. It can be said that Marvel never brings Gwen back because it was such an iconic moment in comic book history.